Clean Air in London considers that the contribution, if any, of ozone pollution in the circumstances reported throughout the inquest into the tragic deaths of three SAS selection soldiers in July 2013 should be investigated*

CAL is today publishing the evidence which it sent to the coroner.  The coroner decided last year that the issue was not relevant

Clean Air in London (CAL) campaigns for an end to dangerous pollution in London and beyond.  It has been recognised and awarded for its pioneering work, which has contributed to an understanding of the serious problem of excessive air pollution and its effects.

One of the problems of air pollution is that it is dangerous and can cause premature death.  This is well documented.  Less recognised is the fact that pollutants can be especially dangerous to otherwise healthy people undertaking strenuous exercise.  CAL gained and shared expert information on this problem in relation to the London Olympic and Paralympic games with the aim of ensuring that pollution levels in London could not present a danger to competitors.  In that context the danger was recognised, but sadly, although it is likely that excessive air pollution, including high ozone levels,  causes or contributes to sudden deaths this is not generally recognised or well known.

CAL is of the view that it is important to know whether, and if so how much, ozone pollution contributed to the tragic deaths of the SAS selection soldiers during their strenuous exercise on the Brecon Beacons*.  To this end it wrote to the coroner last year and included information about ozone pollution and its effects.

The coroner decided that the issue was not relevant.  CAL remains of the view that the contribution, if any, of ozone pollution in the circumstances reported throughout the inquest should be investigated*.  CAL is today publishing the evidence which it sent to the coroner.

2_Appendices to HG letter to Coroner 140814 as amended

Exhibits to Appendix sent to Coroner 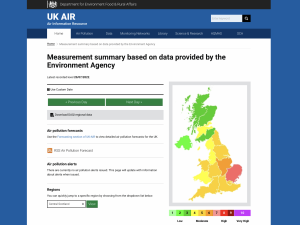